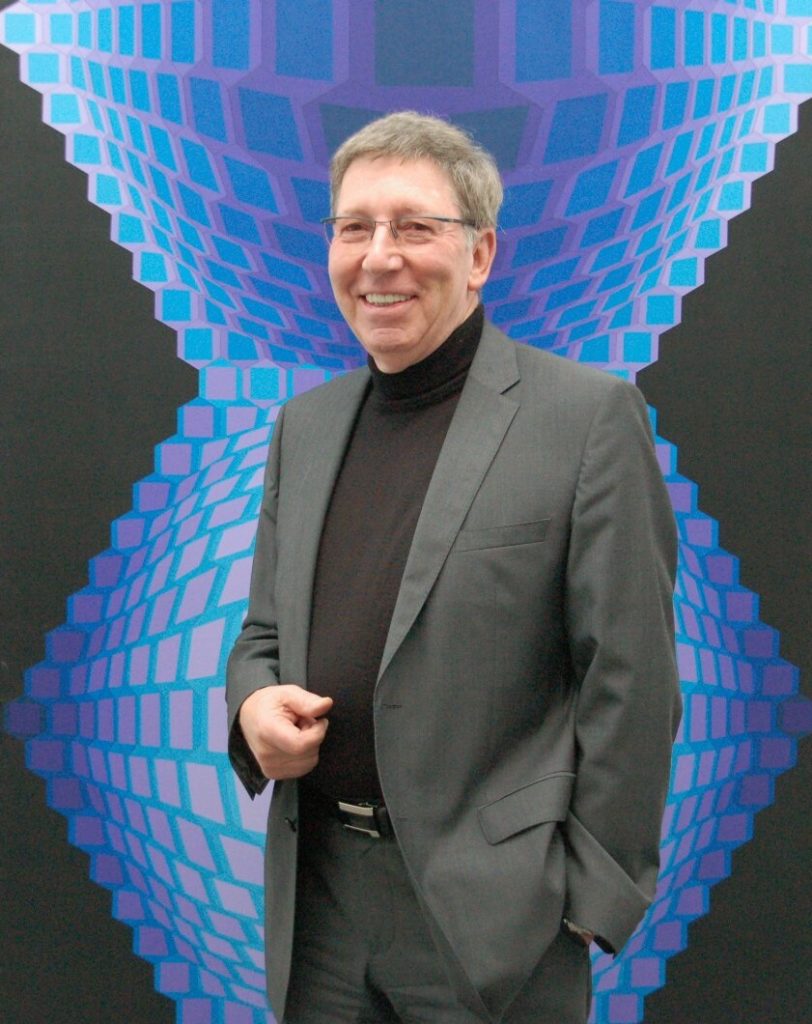 Jürgen Messmer discovered his love of art while studying industrial engineering in Munich. In 1978 the entrepreneur succeeded in acquiring large parts of the estate of André Evard (1876-1972), a pioneering painter of Swiss modernism. Coming to terms with Evard’s life and work is a matter close to Jürgen Messmer’s heart.

Through Evard, Messmer found his way to concrete, constructive art, which is now the focus of his collection. His great passion for art motivated the former manufacturer of exclusive writing implements (messmer pen) to various exhibition and funding initiatives when he was still with the company.

An example of this is the International André Evard Prize, which Messmer initiated and is aimed at artists from the concrete-constructive field.

Making art and design accessible to the public – this ideal drives the collector to this day. With the foundation and museum, Jürgen Messmer has fulfilled a dream.

Mr. Messmer, perhaps you can start by telling us a few sentences about the history of your former company.

In 1986 I founded my own company, which dealt exclusively with the development and production of writing implements and sold these self-developed products directly to industry and trade with its own sales force. This again specifically as an advertising product. Several design awards have confirmed the originality and design quality of the products.

How was your path to art? Is there a special key experience or did you fulfill a childhood dream with art?

I came to art during my studies in Munich. At that time I visited almost all museums, especially the Alte Pinakothek. After my studies I started collecting and grew more and more into art. A very striking key experience was meeting the great and important American collector Henry Drake in New York. The invitation to his house, where I encountered paintings from the 20th century by all the important artists of classical modernism, was something grandiose for me. An invitation to his chalet in Switzerland followed. Artists from Van Gogh to Picasso and Kandinsky were also represented in his holiday home. It was Henry Drake who finally drew my attention to André Evard – I was immediately hooked!

When did you have the idea of starting an art foundation and a museum?

That was in 2007 when, in a conversation with Roland Doschka, a good friend and well-known exhibition organizer, the idea arose of not only presenting our own collection in an art gallery, but above all interesting exhibitions for the public. Basically, the idea was a logical consequence of the objective pursued by the foundation: namely to promote art. Because only if you convey good art to many people and bring them closer to them, will the artists ultimately have better sales opportunities.

The main focus of the collection is the work of the Swiss artist André Evard, who has already been mentioned several times. What does this painter mean to you?

André Evard means a lot to me and we are constantly discovering new things in his multifaceted work, especially thanks to the numerous visitors. The fact that he never let himself be pressed into a stencil and that he painted objectively and constructively throughout his life, and this at a high level, fascinates me to this day. A unique line of development can be seen in his work, beginning in Art Nouveau and continuing to expressionist, but still representational motifs such as can be seen in his painting “Pont Neuf”. In the 1920s, Evard went a step further and between 1923 and 1925 found abstraction. Concrete constructivist images such as the machine image from 1925 or later after the war “Kabuki” are unique testimonies of this directional style, which makes Evard something special for me. The artist marked his important paintings on the back with a “PP” as an abbreviation for “propriété privée”, which indicated his private property. In these works, which he almost only painted for himself, he tried out avant-garde techniques and found his way to the concrete and constructive. Fortunately, these important works, especially from the 1920s, are almost complete.

Which other artists in your collection are you particularly close to? Can you give us some examples?

Big names like Picasso or Dix, which I bought for my collection relatively early on, don’t mean as much to me as they used to. The classics of the concrete-constructive trend, such as Francois Morellet and Alberto Magnelli, have become more important to me. Werner Bauer, Hellmut Bruch, Roland Helmer, Jean-Pierre Viot, Jo Niemeyer, Friedrich Geiler and Klaus Staudt are also close to my heart. This is certainly also due to the fact that many of these artists’ works have accompanied me for a long time, and I am personally acquainted with and friends with many of the artists. Works like the one by Otto Freundlich that hangs next to my desk delight me every day. So “Syta” by Vasarely was always a wish – in the run-up to our Vasarely exhibition I was finally able to fulfill this wish.

They regularly offer a prize for artists worth 10,000 euros. Is the call for entries aimed at young, still unknown artists and thus serves to promote young talent or is it open to everyone?

This award is open to everyone, internationally. This is also shown by the fact that around 600 applicants from 33 nations took part in the last call for applications. Here there is also a great opportunity for young artists to measure themselves against established artists. Within the international concrete-constructive scene, the Evard Prize has meanwhile gained a great reputation and is considered a special event. The scene, which is at home all over the world, is based on old masters like Max Bill and Josef Albers as well as Anton Stankowski, Günter Fruhtrunk, Bridget Riley and the South Americans Carlos Cruz-Diez and Luis Tomasello. There are also numerous young artists who continue the legacy of the Concrete. The International André Evard Prize has set itself the goal of promoting not only established positions but also young, unknown artists and anchoring them in the concrete scene.

What else would you like for your collection? Is there another work that you have been flirting with for a long time?

Of course there are works… On the one hand, I’ve always wanted a classic Fontana, but the prices have run away here, of course. On the other hand, thanks to private and institutional loans that enrich our exhibitions, I can now present artists of a high standard that I would not be able to acquire in this variety for my own collection. I still have a few wishes for the collection. I still want to acquire a few things, especially in the concrete-constructive line. I would be particularly happy about an Agam, about works by Richard Paul Lohse or Camille Graeser. I would also welcome acquiring more of Max Bill’s work for the collection.